Settled Comfortably In His Bed. .

Harvey went to theatre at 4.30, he was a little trooper. He fell to sleep, I gave him a kiss on his head and left him in safe hands. Harvey got brought back to the ward at 7.45. I carried him from the trolley to his bed, he was a bit sore and stiff bless him. In theatre they managed to get a line in on second attempt, he has little cuts both sides of his neck where they have tried. He has a dressing on the bottom of his back where they did the bone marrow aspirate, and whilst there they took blood for all the blood tests they needed. They tried several times to pass the impedance test but couldn't which has caused trauma to his nose and down his throat. Since coming back he's been very settled and has just slept. Harvey's doing well from theatre and now has got his TPN back up and running. Hopefully his bloods haven't been affected too much from not having his TPN for 12 hours today. Thank you to all who have been asking about him and sending your love. Hopefully after a good nights sleep he'll be a bit better tomorrow 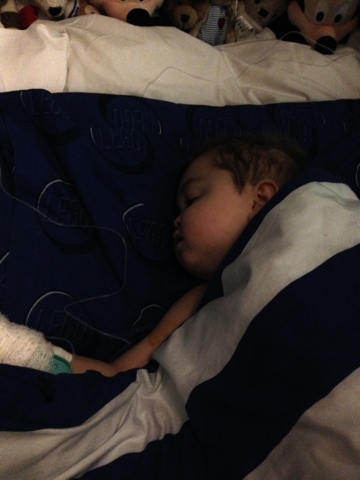