Well, the best my consultant could describe me today is like minestrone soup! He was explaining about my blood and that's how it got described, like the noodles in the soup. It was funny. Mummy and Clair had a good giggle about it whilst taking some noodles (blood) from me earlier. It's a good job I like my consultant. He's got a soft spot for me too, he lets me raid his pockets and has even given me loose change once because I like to play with coins.
It's been decided not to transfuse me as of yet because my bloods are up and down all of the time. The results from the bone marrow aspirated are being chased up to see how things look. My line is leaking again so I had to go for a lineography today, it looks ok. There's no holes in my line anywhere so just got to keep an eye on this. My consultant said it could be because my neutrophil count is low which is slowing the healing process down which could be why my other line fell out?! Who knows.. One of the consultants is meeting up with my consultant from Birmingham today or tomorrow to discuss things and my consultant here has emailed him to find out what plans are too. My stoma is doing my head in today, it keeps itching me. Mummy's not happy because I've pulled my bag off twice already!! Oops! She said I have to sit and think about my actions. Haha .. She tried to act like she was serious but burst out laughing at me.
We started watching grease earlier, mummy starting singing to me which was making me laugh, she soon stopped when the surgeon walked in. Need to thank him for shutting her up really! Hehe. Respiratory doctors haven't got the results from the sleep test yet so they said it'll be Monday now. I'm still now sleeping great so we've had one of my sleeping medicines increases to see if it helps. There's room for it to be increased again if needs be.
I've not been too bad today, bits of pain but nothing major. I've been playing with polystyrene with my teacher which was fun, I've been nicking people's badges, playing with my Lego and now I've got stickle bricks whilst watching Mr Maker. 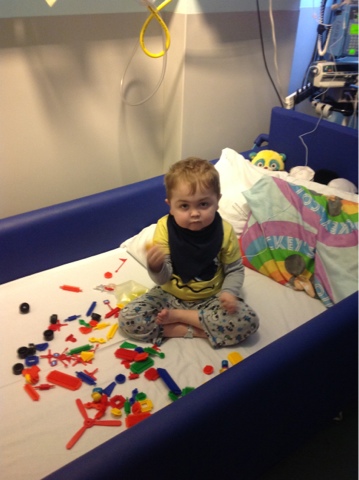