Yesterday I got started on antibiotics again because my weekly urine sample grew a bug called klebsiella. It's a nasty bug that is hard to treat sometimes as its resistant to a lot of antibiotics. I've had to do a repeat urine sample to be tested again. It was also agreed to up my time off TPN to 3 hours now. I did ok, my sugars dropped low at one point but came back up and remained stable afterwards. Mummy's been spending loads of time on the iPad looking at beds and equipment for me so whilst she was doing that I raided her purse. My Bupa nurse came yesterday to asses mummy doing my TPN, he stood quite close to my bed at one point so I went straight into his pocket and pulled out a £10 note and his blackberry!! He was laughing though so he saw the funny side. Some people can be funny though when mummy takes me out. Don't think they have a sense of humour!! I've had to have my stoma bag changed quite a few times since yesterday, my skin is really sore and broken down. Even water touching it is extremely painful. We have swabbed it to make sure there's nothing there that's causing the problems because it just seems to be getting worse and bleeds at times. I've done a bit of painting earlier, I did my hand and foot prints. I didn't like having the paint on my feet. I'm just waiting to go in the snoozlin now so thought I'd update you all. We're not sure about our plans for weekend because of the weather. My sister phoned earlier to see how I was and to see if she was coming here tomorrow, mummy had to tell her that it all depends on the weather. I hope it doesn't stop is from seeing them, it's been nice spending time with them and auntie dee dee and day of course!
Got to go, I've got to have my antibiotics now. 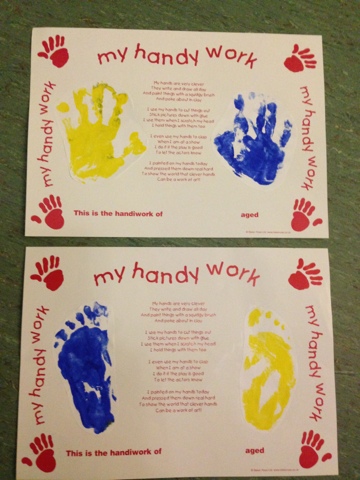